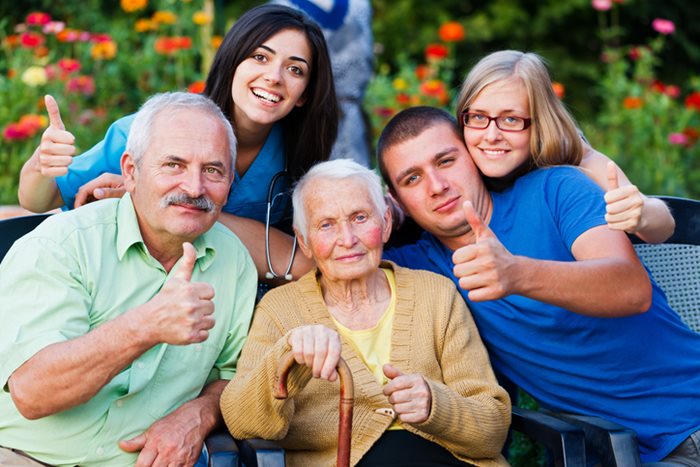 Family. It’s the word that’s central to Interim HealthCare’s mission — serving the care needs of families. In some cases, Interim professionals even become part of those families. As one customer wrote, “My Mom was a client with Interim for over two years. The Interim staff…helped our family navigate the difficult road after her Alzheimer’s diagnosis.  Our caregiver was with us 40 hours a week and truly became a member of our family.”

But many of Interim’s franchise owners also use the word to describe the relationship they have with the national organization, and with each other. It’s not uncommon for multiple generations to be involved in a franchise, making it a true family business.

Here are some of the best things about owning an Interim franchise, from the people who know best — the family of franchisees.

You can change people’s lives

Home healthcare lets seniors stay where they are most comfortable — at home — and lifts some of the burden of caregiving from their loved ones. It can even extend lives. Iowa franchise owner Tom Margolis notes that moving into a long-term care facility lowers a person’s life expectancy.

“We give people the ability to maintain their freedom at home,” Margolis says. “If someone can stay at home, they can be there oftentimes two, three, four or five times longer…that’s what we love [about what we do].”

You help employees advance and succeed

Owners of Interim franchises see their impact extend beyond their clients’ lives as they provide paths for employees to advance and develop in their careers. Devin Ringling, a second-generation Interim franchise owner in Colorado Springs, Colorado, has employees who are celebrating 20 years with the business. “I have people who entered in entry-level positions that are now upper management in our organization,” he says. “We care not just for our patients, we care for the people who work for us.”

Renee Rand, a franchise owner in Redding, California, agrees that her “amazing” staff is one of the best things about being an Interim franchise owner. With seven locations in three states, Rand says the managers she works with inspire her by treating the offices as though they were the owners. “To watch them grow from being a brand new manager to being a successful operations team is amazing,” she says.

For many franchise owners, it’s the combination of being able to positively affect their clients and their employees that is especially sweet. “I love helping the employees and helping the people,” says Nicolas Mannino, a franchise owner in New Castle, Delaware. “It’s very rewarding to be able to put those two things together.”

You get corporate support to make your business successful

Purchasing a franchise lets you experience the entrepreneurial thrill of having your own business without going it alone. Interim provides extensive support from its corporate offices. Mike Priddy’s Rockdale, Maryland franchise grew from zero to 300 employees in just 26 months. “Interim helped me on the finance side and on the system side,” he says. “They’ve sent employees out to our offices eight or nine times…. They’ve been super responsive in a very rapid growth time.”

Michigan franchisee Margaret Beck remembers being a new franchise owner for only a few months when Interim’s CFO came to visit, making her feel that she really mattered to the organization. “We got calls from the CEO,” she recalls. “Every week you had calls with the training staff. If you had any kind of issue, it was addressed right away.” Interim, she says, really gets to know its franchise owners; you’re not just a number in a large company.

You get help from fellow franchise owners

A dedicated training team and resources from Interim are only part of the support owners receive. Other franchise owners are quick to answer questions and offer advice, too.

“You have a network,” says Tom DiMarco, president and CEO of Salo, Inc., the largest franchise group in the Interim system, with 60 locations in five states. “[Interim] has a great support system from the national headquarters. But it has a wonderful support system from fellow franchisees. You can pick up the phone to anybody.” Owning an Interim franchise, he says, is all about fellowship and the confidence of knowing that you have people to lean on when you need them.

You can start a family business

Many Interim franchise owners got involved as a way to launch and grow a family business. Husband and wife team Devin and Cynthia Ringling now have three generations involved in their franchise, including their son and Devin’s parents, and they’re not the only ones to have multiple family members working together. “People want to see their family come into the business,” Devin says.

Margolis’ long-term plans include bringing his business partner’s young son into the franchise when he’s older and hopefully passing the business onto a third generation down the road. “We’re looking at creating generations in this company, not just five or 10 years.”

Kenna Simmons is a former editor for the Arthritis Foundation and WebMD. Based in Atlanta, she writes about healthcare, business and where the two intersect.